For the past three years, Dillon has been a service member in the United States Army. His time as a soldier is coming to an end. He decided to get out early due to Harper’s medical needs. It is a bittersweet time; joining the Army was the best decision he made for himself and for our family, but we are both so excited for this new journey. Here is a recap of the past two and a half years.

In January 2015, Dillon and I made the decision that it was best for him to join the Army. On March 12, 2015, he swore into the United States Army.

He left for basic training on August 24, 2015, and endured the physical and emotional challenges for 10 weeks at Fort Sill, OK. He graduated on November 6th, 2015 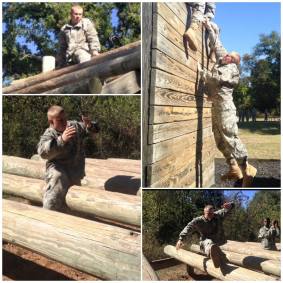 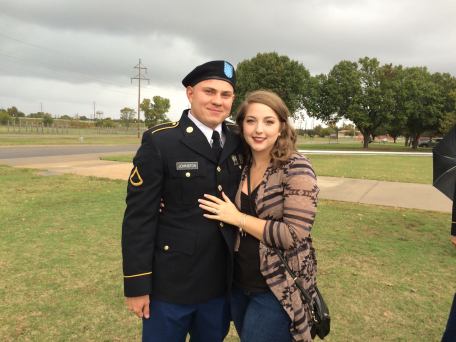 The following day, Dillon went to Fort Sam Houston, TX to begin his 52 weeks of AIT as a 68K – Medical Laboratory Specialist. Luckily, I was able to join him. For the first 15 weeks, he lived in the barracks. I lived in an apartment a few miles away from post. His AIT was split up into two phases, Phase I and Phase II. Phase I consisted of book work, homework, tests, and a lot of studying. Dillon was finally able to move off post in February 2016. He graduated from Phase I on June 3rd, 2016.

For Phase II, Dillon had the option to go to Fort Lewis, WA for training, but he decided to stay at Fort Sam Houston. Phase II was a lot more relaxed, it focused more on hands-on training. During this time, he had to have a minor surgery on his shoulder in October. This set his graduation date back a couple of months. He graduated from Phase II on March 14th, 2017 and obtained an associates degree in Medical Laboratory Sciences. 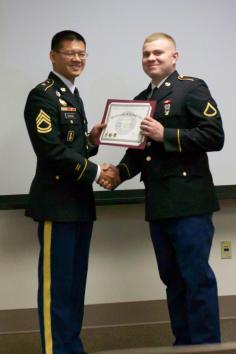 His first and final duty station was at Fort Hood, Tx. We laugh all the time because we thought joining the Army would allow us to travel and live in different places, but we never left Texas 🙂 Dillon began working at the blood donor center on post. He was promoted to SPC on June 7th, 2017 and later became NCOIC of the mobile blood drives at the donor center.

Dillon recently accepted a job at a hospital nearby. He will continue working as a lab tech.

If you have any questions about military life or Dillon’s MOS, feel free to contact us! 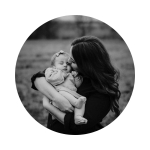 Decided to spend the day in San Antonio to celebrate Harper’s birthday! 🥳
My name is Harper Abigale and I have Trisomy 18 (Edwards Syndrome). Trisomy 18 is a genetic disorder that is caused by having a third copy on the 18th chromosome. About 10% of babies with Trisomy 18 are born alive. Only 10% of babies born alive live to be a year old. A lot of doctors, medical books, and research will tell you that babies with Trisomy 18 might live a few days, at most, a couple of weeks. They will also tell your that babies with Trisomy 18 are incompatible with life. Today I am two years old. And let me tell you, I AM compatible with life. I’m ticklish, I’m always happy, I prefer the cold, I can roll all over the floor and lift my head up to look at you, I can stand with help from mom and dad, I sleep through the night, I love my back rubbed and will get irritated when you stop, I like colorful lights and watching tv, I giggle when my dad tips me upside down and smile when mom kisses me on my cheeks. I have doctors who believe in me, family that love me, friends that care about me, and two parents that would do anything in the world for me. I have Trisomy 18 and I am full of life.
Day 14: Our daily recap of Harper has come to an end. Harper turns two years old tomorrow. Something I cannot even fathom. Get ready for the sappy post tomorrow 😭😍
❤️❤️❤️
Day 13: Harper was off all medications by the time she was 13 months old. At one point she was taking 4 different medications- Lasix, Gabapentin, Nexium/Zantac, and Keppra. Now, the only thing she takes is melatonin to help her sleep (and us too 😉) and Miralax. This past year has felt normal. Harper has only had a one night hospitalization due to getting backed up. And we’ve been to the ER again for the same reason. We went from seeing 5 of her main doctors (cardiology, GI, pulmonology, general surgery, palliative), once to twice a month. Now, we only see two of those main doctors twice a year and the other three once a year! 🤗We also haven’t had to use any oxygen support or her pulse ox in 10 months!
Day 12: When Harper turned a year old, it was the best feeling in the world. It felt like we beat death, literally. Her first year of life, we waited. Every day we waited for her time. It felt like a race to get her to first birthday. Almost like we would get a trophy for keeping our daughter alive for a whole year. But her first birthday created a whole new meaning of life. We began to live. Harper beat all of the odds. All of those doctors and medical books out there, she proved them wrong. When Harper turned one, she finally started living. She no longer had to fight to breathe, fight to live. She just had to be a baby. And that made her so happy.
Day 11: After a 30 day hospitalization, we were finally discharged. Only to be back less than a week later. On New Years Day, Harper started crying on and off. She would stop and hold her breath and stare at something. Her sats dropped quickly. We rushed to our local ER and were transported to Dells. Harper was having febrile seizures. The only thing they thought caused them was being 1 week post op from having open heart surgery and her body was adjusting. They put her on Keppra and we were sent home a few days later. (Side note: Harper has not had any type of seizure since then and she has been off Keppra since March 2019!)
Day 10: Harper was sick. Really sick. There was a point during this hospitalization we thought we were going to lose her. Our first night there, her O2 dropped below 20 and her left lung collapsed. She had a bronchoscopy done a few days later which showed left side vocal chord paralysis. About our second week there, Harper spiked a 106 fever and she was miserable and crying nonstop. They decided to intubate her to keep her comfortable. They finally did a heart cath about a week before Christmas which showed how bad her heart was. Which ultimately was causing all of her pain and misery just to breathe. Then, on Christmas Eve Day (at 10 months old), they repaired her heart. She was taken off the ventilator within 24 hours and breathing without any oxygen assistance within 48 hours. It was a sigh of relief to see how happy and healthy our baby girl was. But we ached the thought of what we had been putting her through for the past 10 months.
Day 9: In three months, we took an ambulance twice to Dell Children’s in Austin. Our local hospital wasn’t sure why Harper continued to get sick and they wanted more eyes on her. The first trip, doctors thought she might have a virus and that it will just take time to get over. We were there for a few nights and then sent home. Obviously, Harper never got over the virus which is why we were sent back. The 2nd hospitalization ended up being a 30 night stay.