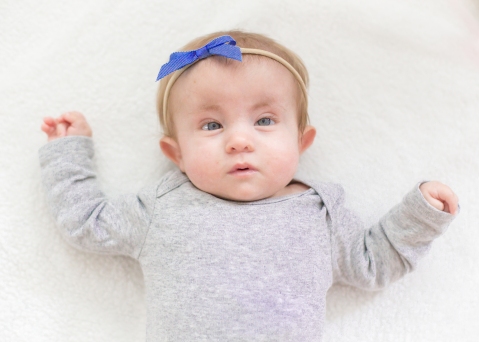 After being home for not even a week, Harper ended up running a fever. Read here to see last month’s post. We went to our local ER and then from there decided that we wanted to be transferred to another hospital. We have been in contact with this other hospital for a few months now and we wanted the doctors there to take a look at Harper in this type of condition. Harper and I had our very first ambulance ride together 😉 We only spent a few days in the hospital. All labs and viruses came back normal/negative. The doctors concluded that she never got over the previous cold.

We actually ended up back in the hospital on the day of her 9 month birthday. Harper ran another fever and was pretty congested. Of course, we were only in the hospital for a couple of days and all of her panels came back negative. Again, the doctors concluded that she is holding on to this cold. It is just that time of year.

Harper is still around the 10lb mark. Being sick for over a month doesn’t help with gaining weight. Her feeding amount is still the same and of course, she is still in the same size clothes. This past month, Harper has been holding her head at midline while sitting on her bottom a lot longer. She is eager to keep her head at midline to look at me. She gets very frustrated when she starts to get tired.

We always get asked if Harper sleeps through the night and the answer is no. When you’re in and out of the hospital, going to doctor appointments and seeing therapists, it is extremely hard to get her on a schedule. The longest she sleeps for in one setting is about 6 hours. If we’re lucky, it’s at night.

This past month, Harper has been enjoying her bottle a whole lot more. Right now, drinking from a bottle is just for fun. We do not include the amount she drinks into her calorie intake for the day. It usually takes her about 30 minutes to drink half an ounce. She is still trying to grasp the concept of suck, swallow, breathe. So usually she will suck, push milk to her cheeks, breath, swallow, breathe. Instead of suck, swallow, and then breathe…every single time. Harper also roots when the bottle touches her face, which is a big accomplishment. A few months ago, she wanted nothing to do with a bottle.

Harper caught her first fish ☺️🐠
Three facts about me: 1. I hardly ever drink. I’ve never been someone who just sips on a cold beer or wine. But hey, my husband does appreciate having a full time DD 😂 2. I love fall time. I’m the typical white girl that is obsessed with pumpkin candles, flannels, jeans, and boots. I have no shame 🤷🏼‍♀️ 3. I’ve been a Grey’s Anatomy fan since day 1 ✌🏼 I’d love to get to know some of my followers, tell me three facts about yourself! 🌿
Here’s a little something to brighten your Monday! With everything going on, tell me something good that has happened in your life! 🍓
He’s not a nurse or a doctor. He’s not on the front line. He’s a lab tech. Yup, he’s that guy. He’s at work every single day preparing blood for traumas and emergency surgeries for doctors and nurses. He may not interact with patients, but he still has to walk by and talk to doctors and nurses. Then at the end of the day, he goes home to his medically fragile 2-year-old daughter. He leaves his shoes outside, puts his laundry in the washing machine, and takes a shower. He’s doing his part. But what if it’s not enough. What if he does catch this nasty virus and passes it on to his daughter. Then what? I respect and think highly of doctors and nurses, I really do. But can we also thank all of the other healthcare workers who still go to the hospital or clinic every day? They may not be on the front line, but they are important too. So thank you lab techs, pharmacists, respiratory therapist, x-ray techs, child life specialists, janitorial staff, cafeteria staff, nutritionists, and therapists. I am thinking of you and hope you and your families stay safe during this time. If I’m missing one, please comment them below. 📷: @laurathornhillphoto
🔹TRISOMY 18 AWARENESS DAY!🔹 Did you know Trisomy 18 occurs when there is an extra copy on the 18th chromosome instead of the typical two. That’s why we celebrate on March 18th (3.18)! Approximately 1 out of 7,000 pregnancies can have a baby with Trisomy 18. Most babies with Trisomy 18 are full-which means every cell in their body has an extra copy on the 18th chromosome. There are cases that are Mosaic or Partial-which only means some of the cells have an extra copy. Usually, Trisomy 18 is not passed on by the parents. But there are a handful of cases where the parents are carriers. During a pregnancy, an amniocentesis can test whether or not the baby has T18. You can also test the baby once he/she is born. Parents can get tested to see if they are carriers. Some common disorders and illnesses in Trisomy 18 are feeding difficulties, severe reflux, slow growth, apnea, seizures, kidney defects, UTIs, developmental delays, pneumonia, chronic constipation, and pulmonary hypertension. A lot of children usually have to have multiple surgeries throughout their life: open heart surgery, g/j tube placement, fundoplication, tracheostomy, and cleft lip repair. They also see a numerous amount of different doctors. Statistics say that children with Trisomy 18 have a 5%-8% survive past 1 year. With those numbers, a lot of doctors encourage parents to abort their baby. They think children with Trisomy 18 are incompatible with life and are a burden to their family. Spreading awareness will help medical professionals know and understand that children with Trisomy 18 are full of life and aren’t a burden. (Side note: there are a lot of doctors that love and cherish babies with T18 and will do anything for them.) I know for a fact that kids with Trisomy 18 can feed by mouth, roll over, crawl, communicate (verbally or sign language), interact with toys and people, have favorites and things they don’t like, walk (assisted and non-assisted), and have more attitude than a teenager 😋 Help us spread the word by sharing this post!
We’re doing just fine 😬🥰
2 years ago, we were preparing to bring Harper home!! She passed her car seat test and we were in the process of learning how to take care of her. It was a joyous but terrifying time. We were so ready to be home with our daughter but we’re mentally and physically not prepare to take care of our medically fragile 5lb baby.
Today we celebrated Harper’s 2nd birthday with friends and family! 🥳
Decided to spend the day in San Antonio to celebrate Harper’s birthday! 🥳